Preah Khan (Khmer: ប្រាសាទព្រះខ័ន; "RoyalSword") is a temple at Angkor, Cambodia, built in the 12th century for King Jayavarman VII to honor his father. It is located northeast of Angkor Thomand just west of the Jayatataka baray, with which it was associated. It was the centre of a substantial organization, with almost 100,000 officials and servants. The temple is flat in design, with a basic plan of successive rectangulargalleries around a Buddhist sanctuary complicated by Hindu satellite temples and numerous later additions. Like the nearby Ta Prohm, Preah Khan has been left largely unrestored, with numerous trees and other vegetation growing among the ruins. Preah Khan was built on the site of Jayavarman VII's victory over the invading Chams in 1191. Unusually the modern name, meaning "holy sword", is derived from the meaning of the original—Nagara Jayasri (holy city of victory). The site may previously have been occupied by the royal palaces of Yasovarman II and Tribhuvanadityavarman.

The temple's foundation stela has provided considerable information about the history and administration of the site: the main image, of the bodhisattva Avalokiteśvarain the form of the king's father, was dedicated in 1191 (the king's mother had earlier been commemorated in the same way at Ta Prohm). 430 other deities also had shrines on the site, each of which received an allotment of food, clothing,perfume and even mosquito nets; the temple's wealth included gold, silver,gems, 112,300 pearls and a cow with gilded horns. The institution combined the roles of city, temple and Buddhist university: there were 97,840 attendants and servants, including 1000 dancers and 1000 teachers. 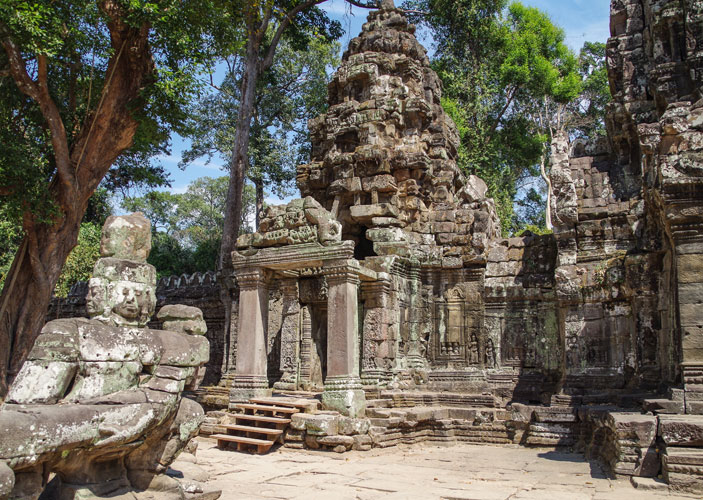