Phnom Bakheng (Khmer: ប្រាសាទភ្នំបាខែង) at Angkor, Cambodia, is a Hindu and Buddhist temple in the form of a temple mountain. Dedicated to Shiva, it was built at the end of the 9th century, during the reign of King Yasovarman (889-910). Located atop a hill, it is nowadays a popular tourist spot for sunset views of the much bigger temple Angkor Wat, which lies amid the jungle about 1.5 km to the south ea﻿st. Constructed more than two centuries before Angkor Wat, Phnom Bakheng was in its day the principal temple of the Angkor region, historians believe. It was the architectural centerpiece of a new capital, Yasodharapura, that Yasovarman built when he moved the court from the capital Hariharalaya in the Roluos area located to the southeast. An inscription dated 1052 AD and found at the Sdok Kak Thom temple in present-day Thailand states in Sanskrit: "When Sri Yasovardhana became king under the name of Yasovarman, the able Vamasiva continued as his guru. By the king's order, he set up a linga on Sri Yasodharagiri, a mountain equal in beauty to the king of mountains." Scholars believe that this passage refers to the consecration of the Phnom Bakheng temple approximately a century and a half earlier.

Phnom Bakheng is one of 3 hilltop temples in the Angkor region that are attributed to Yasovarman's reign. The other two are Phnom Krom to the south near the Tonle Sap lake, and Phnom Bok, northeast of the East Baray reservoir. 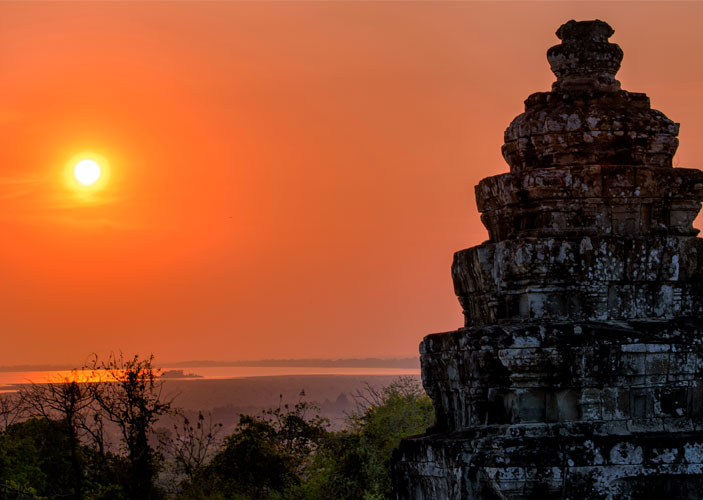